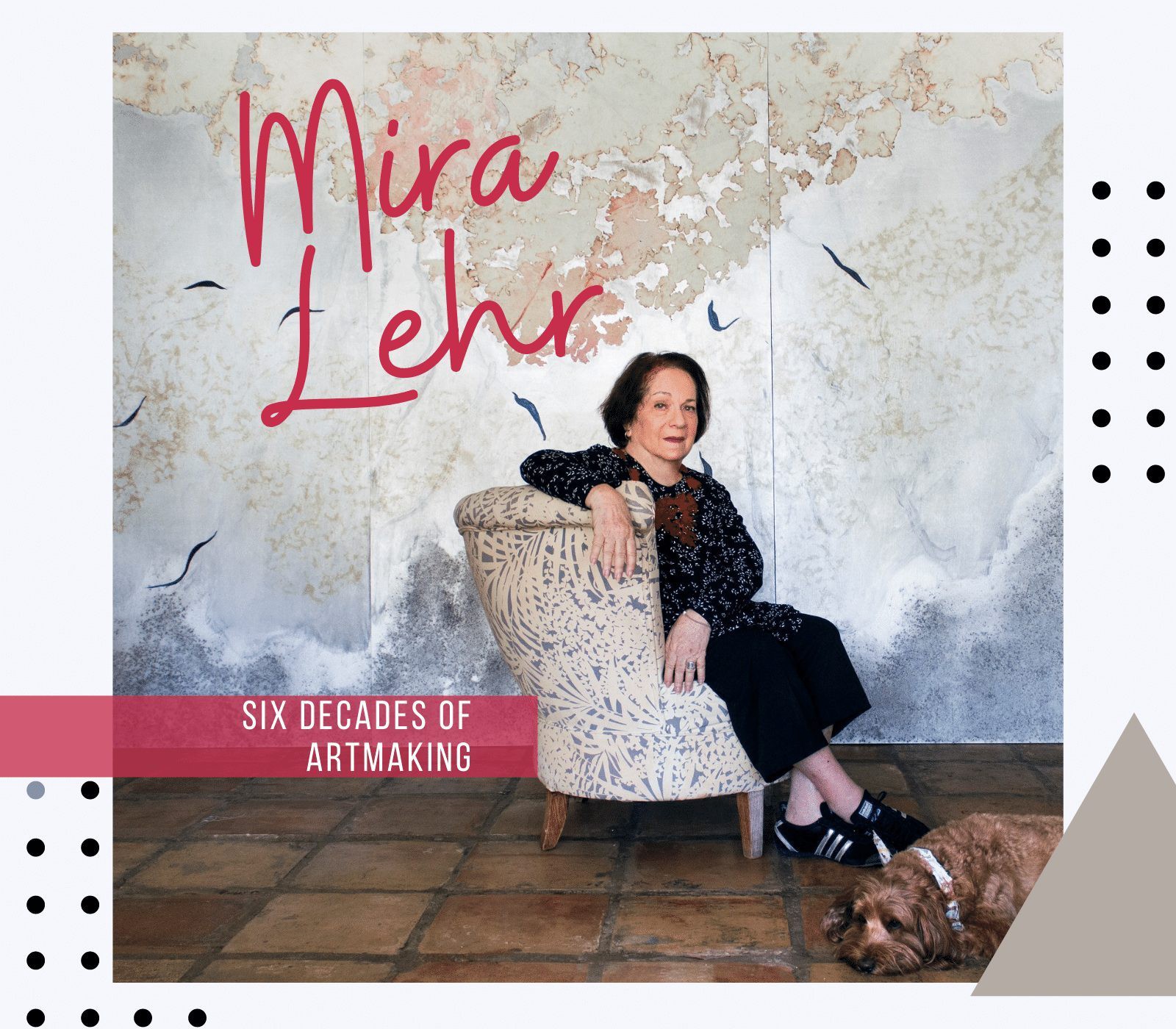 Mira Lehr has been collected by major institutions across the U.S., including the Smithsonian Museum of American Art (Washington), the Getty Museum Research Center (Los Angeles), Perez Art Museum (Miami), the Jewish Museum of Florida (Miami Beach), the Orlando Museum of Art, the Bass Museum (Miami Beach), and the Frances Lehman Loeb Art Center (NY), among many others.

An Interview with Mira Lehr: Six Decades of Artmaking

Mira Lehr’s solo and group exhibitions number over 300. She is a graduate of Vassar College (1956) with a degree in Art History, under the mentorship of Linda Nochlin, the renowned feminist art historian.

Lehr’s work is in the private collections of Elie and Marion Wiesel, Martin Margulies, Jane and Morley Safer, the Collection of Robert Feldman, M.D., and the artist Judy Pfaff, among others. Her exhibition, “A Walk in the Garden,” headlined Art Basel Miami Beach in 2019 with major national and international critical acclaim.

In the 1950s, Lehr studied and worked in New York as an artist, where she met some of America’s most prominent masters including Joan Mitchell, Lee Krasner, and Helen Frankenthaler. She studied with James Brooks, Ludwig Sander, Robert Motherwell, and within the Hans Hofmann circle.

When Mira Lehr moved back to Florida in 1960, she was shocked at the lack of an art scene, especially for women. She convinced many of the masters she met in New York to come down and visit, and to lead workshops for her league of women artists. This helped in the evolution of art in Florida. She founded Continuum in 1960, one of the country’s first co-ops for women artists.

Then Lehr was included in the prestigious Leonard Lauder Corporate Collection in New York. Thirty of her paintings were commissioned for the permanent collection of Mount Sinai Hospital. Her work can be seen in American Embassies around the world and is permanently on view in the lobby of the Evelyn Lauder Breast Center of the Sloan Kettering Memorial Center.

Her video installation, V1 V3, was on view at the New Museum, NY. Her work has been included in numerous art fairs during Art Basel Miami Beach, including Art Miami, Pinta Art Fair, and INK. She was the recipient of the Vizcaya Museum Lost Spaces Commission, where she was commissioned to create a site-specific installation by the Vizcaya Museum & Gardens as part of Vizcaya’s centennial celebration.

In South Florida, she is acclaimed as “The Godmother of Miami’s Art Scene,” because from 1960 until the mid-90s she spearheaded one of the nation’s first co-ops for women artists. It was called Continuum, and flourished for more than 30 years, helping to launch the careers of many women artists which she mentored.

The artist Mira Lehr is also recognized as being the art world’s version of The Marvelous Mrs. Masiel because, in the male-dominated art scene of 1950s New York, she was one of the few women artists of that era in NYC.

Now, at the bold age of 85, Mira Lehr is creating more work than ever in her six decades of artmaking. 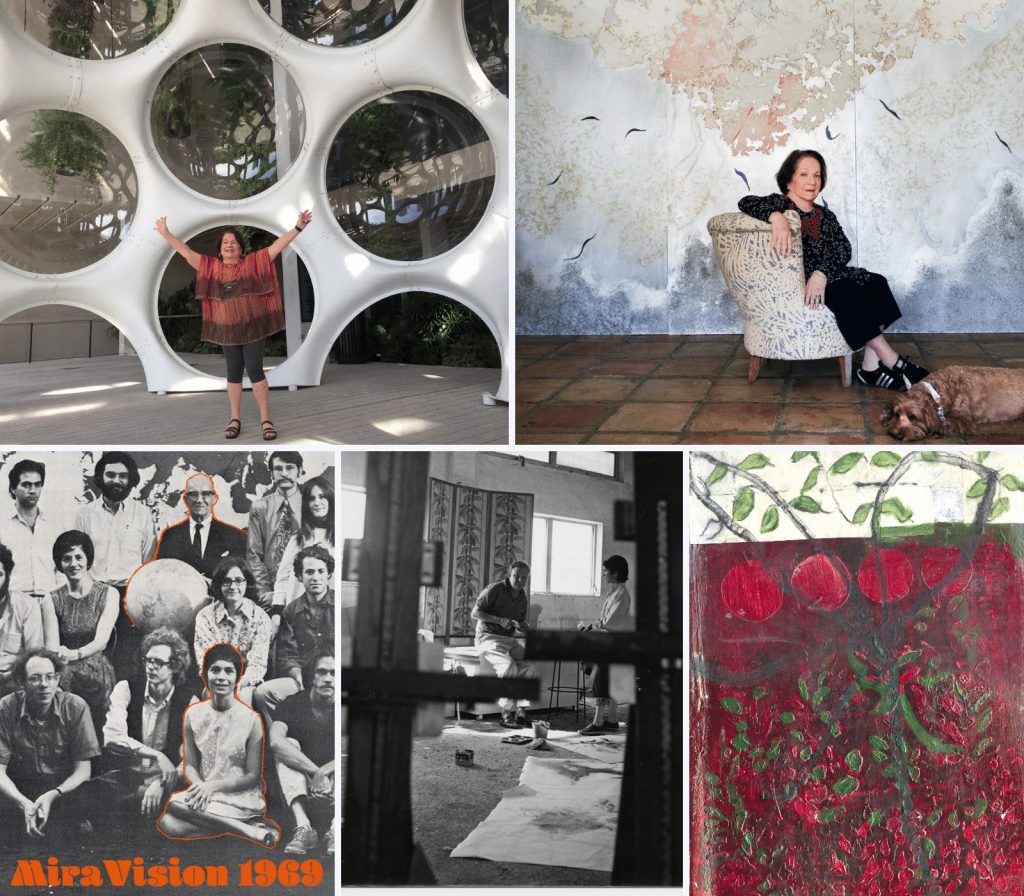 Mira Lehr has been invited to present a new exhibition from October 15 through December 15 at Rosenbaum Contemporary gallery in Boca Raton, Florida. The exhibition is called “Planetary Visions: Mira Lehr from Spaceship Earth. The “Planetary Visions” exhibition will also feature an online virtual part that viewers will enjoy from anywhere in the world.

OMTimes: Tell us a bit more about your new artistic endeavor. What was the inspiration behind your Spaceship Earth video message?

Mira Lehr: I’m interested in the earth, on our planet and how things work, and how to make things better.

Now there is more of a crisis at hand, so my latest work revisits the work I did with Buckminster Fuller in 1969. That experience has lingered with me. We do live in a good spaceship, and if we do things correctly, scarcity is not even an issue. There is enough food to go around for everyone to eat, have homes, be clothed, and all those mass necessities. The key is to be more efficient and to do more with less.

When Buckminster Fuller would talk about this, he would close his eyes as though he was getting a message from another plane. This idea about efficiency has always been in my work, but now it’s clarified, and it’s more direct and focused. That’s how my work has shifted and grown.

OMTimes: It seems you create the most seductive artwork using non-conventional materials. How is your process of creation? Do you see the result already in your mind, as a blueprint, translating it to reality, or do you just create your pieces harmonically, in tandem with the flow of your Inspiration?

Mira Lehr: I don’t plan my work ahead of time. Mostly I have an idea of what materials I want to use and what I’m looking for, but it’s not planned. But there is some semblance of an idea before I start, but it’s subtle. I create work by putting a markdown. And then because of my spatial concept, one mark

Leads to another. As I go along, it starts to take its own shape and leads me to the next thing. It’s a combination of my vision with something that comes from another space. Then it becomes more concrete with what I want to say, the method I have, but it starts out initially with abstract marks.

OMTimes: What you think would be the role of your Ecologically Conscious Art in a Post- Pandemic Age, the age of “Reevaluation of mankind as a whole? “

Mira Lehr: That age is actually coming. Our planet is in trouble, and we have to heal it. We have to become wiser and make better choices in the future. This has allowed us to see what damage we brought and what we need to do to change it. I think we all realize that the earth will never be the same again. We either we must change, or we’ll become obsolete. Selfishness and greed don’t work anymore. My hope is for a new vision with the perceptions of mankind. I have guarded hope because I think mankind is meant to be living on the earth and making it work.

OMTimes: You are, without a doubt, one of the most multifaceted and multidimensional artists of our times. You were gifted with an eye that can perceive thin realities behind objects and works of art. Your work with the Mangrove Labyrinth and the High-Water Installations shed light on a myriad of invisible threads connecting the visible to the invisible. In your new video “Spaceship Earth,” what do you see behind the waves of this Pandemic world? Do you see hope for our Humanity on this planet?

Mira Lehr: I’m generally optimistic. I do believe in man’s ability to make things happen that are good. I have a guarded hope that we will fix this earth we are on, and during this time, we have been given this opportunity to reflect.

This Pandemic has made us stay home, have to do less. We can’t run around like we once did before. This is a period to come to terms with what’s happening, a chance to make a go of it. I think it will change us for the better. I hope so. Certainly, we can’t be living a life of self-interest like we once did. 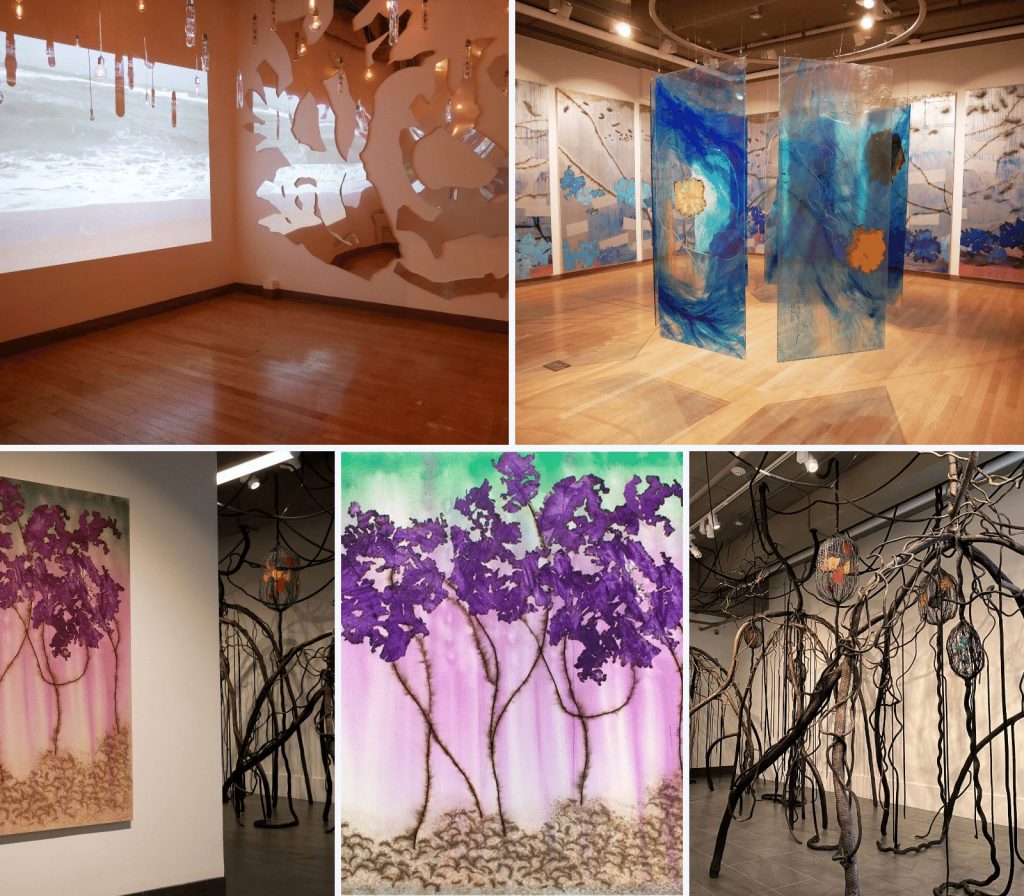 OMTimes: How do you keep this delicate balance in your Art between the seen and the unseen, the visionary, and the mundane when you are creating?

Mira Lehr: When I’m working, I’m not really conscious of the mundane. I’m in a space where I don’t even think of that kind of question. I work from a zone where my consciousness is there, but too much mental thought is not. I’m aware of what I’m doing, but I go into another dimension where what I’m doing takes over.

It has a life of its own, and I don’t struggle between the mundane and the creative. I work from a place of creativity and visions that make way for different kinds of imagery. When you reach down into your spirit, you’re working on another level where your thoughts are not composed of mundane things. You’re in another area. Somewhere in your spiritual nature, I think, is where this happens.

When I was a little girl, I loved to go to cemeteries because I thought that that’s where people have experienced life and death and been in many profound things that I didn’t know. I’ve always had this other dimension that I live in that has to do with another nature. Not having to do with practicality or things of the world. Things of the spirit.

OMTimes: In my opinion, any form of Art nurtures the human spirit; objects of Art are like “transmitters” of a different frequency of life and creation. Each artwork tells tales of Sadness, of Bliss, of nature that come from the deepest parts of our souls. Your Eco-art has this type of effect and can help us open our hearts to the language of the Universe.

How does it feel to be a catalyst for this type of phenomenon? Do you regard yourself as a “Frequency changer, a creative Warrior of sorts”?

Mira Lehr: Yes, I think I’m a catalyst or transmitter of sorts. It must have something to do with the way I organize things visually, and it comes from a heart/mind connection. The mind can overwhelm the heart. They are very integrated when I am working. The beautiful thing is to be able to share it. It’s like understanding a foreign language between two souls or hearing a concert knowing that there are other people in the room experiencing similar feelings. A type of communication that makes it so joyous. I think this happens in all creativity – in music, writing, and dance: In integrated communication with another soul. So, yes, I believe I transmit, and I think I reach certain people, and they transmit to me also.

OMTimes: How does it feel to share this connection with others?

It makes me feel like I’m doing something meaningful. Communicating with the soul of another person brings great joy.

OMTimes: My last question for you, Mira, would be this: As an artist and sensitive soul, do you hold a Mystical Vision for our little planet at this time? What would you personally like to see manifested in our collective reality now?

Mira Lehr: I always have this mystical vision that we are meant to be on the planet and to thrive, to succeed on this Spaceship Earth. That we have been given an opportunity now to recommit to kind of a new re-birth, a new consciousness that we never saw before. We’ll stop polluting, heal the things that we can heal, and be global citizens. OM is the sound of the Universe in Eastern thought. That’s the sound OM when you’re meditating. That’s the sound that you hear. I think that your magazine is about that kind of dimension that goes beyond the worldly into more of the spiritual. That is how all creativity is — communicating with the spiritual realm. When you say OM, things are from another place. They’re from the soul, the spirit, the heart.

To learn more about Mira and her work, please visit https://miralehr.com

This Interview was originally Published In OMTimes Magazine