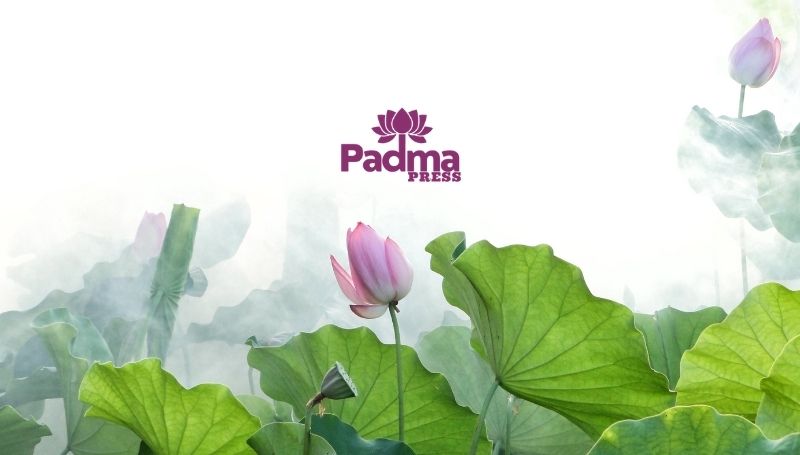 Padma or Pema is the Sanskrit word for the lotus flower. This flowering plant plays an important symbolic role in yoga and Indian religions, such as Hinduism and Jainism, and Buddhism. Pema is often referred to as the “sacred lotus.”

The Padma grows from out of the mud but blooms in perfect beauty above the water’s surface. The Lotus is a powerful archetype that is often seen as a symbol for those who overcome ignorance and suffering to find enlightenment and Self-realization.

The Lotus Flower is cited in many yogic and spiritual sacred texts, such as the Bhagavad Gita. The Lotus represents the soul and its journey for ascension and self-Realization.
Many of the chakra symbols of yogic life feature the Lotus and draw on it to represent purity and divine beauty.

The Padma is also one of the eight auspicious symbols of Buddhism, representing primordial purity. The unfolding petal is a symbol of the expansion of the soul.

What does the Padma or Lotus Flower mean?

In the East, the lotus flower entails spiritual integrity. The Lotus (Padma), also known as the Egyptian Lotus, Sacred Lotus, or Indian Lotus, is an aquatic plant that thrives on water.

In Buddhist, the most important meaning of the lotus flower is the purity of body and mind. The muddy water that welcomes the plant is associated with attachment and carnal desires. The immaculate flower that blooms over the water in search of light is the promise of purity and spiritual elevation.

It is symbolically associated with the figure of Buddha and his teachings. The Padma flower has a profound and sacred meaning for the peoples of the East.
Legend has it that just after he was born, Baby Buddha took his first steps, lotus flowers blossomed everywhere he stepped.

In Asian religions, most deities tend to sit on a lotus flower during meditation.

Many Buddhas and Bodhisattvas as well.

In many Asian cultures’ literature, the Pema flower symbolizes elegance, beauty, perfection, purity, and grace, often associated with the ideal feminine attributes.
In Japan, this flower is often tattooed together with koi fish, meaning individuality and strength.
The closed or button lotus flower is a symbol of the infinite possibilities of Man. In contrast, the open lotus flower represents the creation of the Universe.