Franz Kafka and The Traveling Doll

This story about a traveling doll from the life of Franz Kafka shows his depth of compassion, the transformative power of grief, and the magical power of storytelling.

The Transformative Experience of Grief - Franz Kafka and The Traveling Doll

A year before his death, the writer Franz Kafka saw in one of Berlin’s parks, a girl who was desperate because she had lost her doll.
It’s in 1923. Franz Kafka is 40. Every afternoon, he is walking in a park near his home. Kafka, the story goes, that it was this last time he had visited Berlin. One afternoon, he encounters a young girl called Elsi in a park awash in tears. That little girl had lost her doll and was desolated.

Kafka offered to help the child look for the doll and arranged to meet her the next day at the same spot. Not being able to locate the doll, and to soothe the girl, Kafka composed a letter from the doll to the child, to explain her disappearance. Kafka was planning to read it to her when they met again. Kafka makes up a story of wonders and travels. He tells the girl that her doll has gone off on a journey of a lifetime. 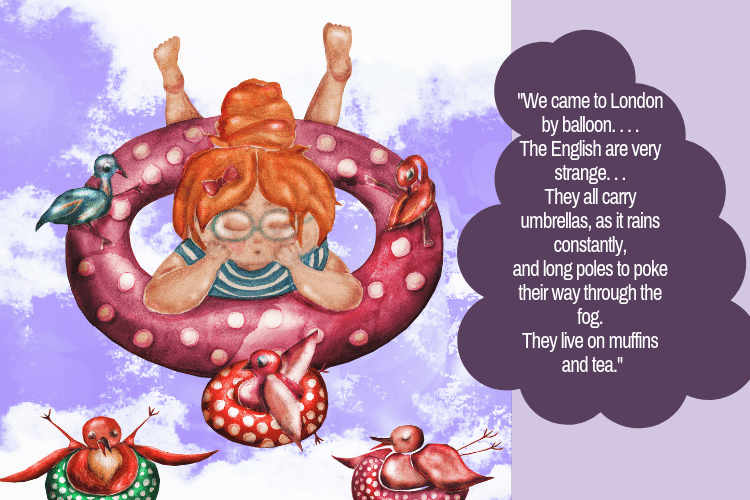 Here is an opening passage of one of the letters, to see the rich construction that the author performs:

“Dear Elsi, first of all, I’m sorry to have left so suddenly without saying goodbye. I’m sorry, and I hope you’re not angry. Sometimes we do things without realizing it, or we react to what our instinct does not say, and we hurt who we do not want.

It’s that the farewells are sad, and I did not want you to cry or try to convince me to stay any longer. Now I know that you will be more at peace knowing that I am well, will rejoice for both of us.
You must know that to live is to keep going forward, to enjoy every moment, every opportunity and necessity […] You taught me many things, made me a good doll. Thanks to you I am free to do this … ”
‘Please do not grieve me, I have gone on a long journey to see the world. I will write to you about my adventures.’
The doll explains that she has gone away to see the world, to make new friends. She loves the little girl but longs for a change of scenery. She promises to write every day to tell the little girl about her new adventures. And so she does.

Transformative experiences alter us externally as well as internally.

This was the beginning of many letters. When Kafka and the little girl met the next afternoon, he compassionately read her from these composed letters, through the imagined adventures of the beloved doll. That comforted the child. So Kafka continued, for several weeks, arriving each morning at the park with a message for his new little friend.

In another Letter, the doll writes: “We came to London by balloon. . . . The English are very strange. . . . They all carry umbrellas, as it rains constantly, and long poles to poke their way through the fog. They live on muffins and tea.”

As Kafka creates, he knows he must prepare the little Elsi for the day when the doll reveals she won’t be coming home. He’s wasn’t certain how he will break the news without breaking the magic spell he had created.

But Franz Kafka is sick. He is terminally ill. Kafka is living the last year of his life. As his tuberculosis worsened, Kafka decided to return to a sanatorium in Prague, where he would soon die at the tender age of 41.

Before he left Berlin, Franz Kafka buys the child another doll. With the figure, it came a letter in which Kafka insisted that this was the doll that belonged to the girl. Indeed, she looked different, but then on her long trips, the doll had seen many amazing sights and gone through many intense experiences. Life had most definitely changed her appearance. The last letter attached clarified the obvious: ‘My travels have changed me.’

Many years later, the now-grown girl found a letter stuffed into an overlooked gap in the cherished replacement doll.
‘Everything that you love, you will eventually lose, but in the end, love will return to you in a different form.”

The Power of Story Telling

Kafka gave this little girl something much more valuable to replace her lost doll. He has given her a story. Elsi had lost herself in that story.
Inside that parable’s imaginary world, the pain of her real-world disappears.

As a terminally Ill person, Kafka also gave her the precious time he had left. dedicating to her many hours of his fading days.
“Solidarity is the feeling that best expresses the respect for human dignity.”

Although we did not know for sure how the story of the girl and the lost doll happened, the highlight was the solidarity that Kafka had with a sad girl, ‘inventing’ the parable of the traveling doll.

Kafka’s kind actions help us see the importance of symbolization and imagination in the transformation of grief.
The story empowered the child, calmed her down, and especially lessened and prepared her for the painful separation of the doll she loved. The little girl was over her grief, She was happy for her doll in her new life.

A note at the back of the book explains that according to a biography of Kafka, this encounter with a little girl who had lost her doll actually occurred.
If Kafka were a more self-centered writer or less disillusioned with his literary career, he would have left copies of those letters for his audience to read.

“No one ever inhabited the threshold more thoroughly than Kafka. On the threshold of happiness; of the beyond; of Canaan; of the door only open for us. On the threshold of escape, of transformation. Of an enormous and final understanding. No one made so much art of it. And yet if Kafka is never sinister or nihilistic, it’s because to even reach the threshold requires a susceptibility to hope and vivid yearning. There is a door. There’s a way up or over. It’s just that one almost certainly won’t manage to reach it, or recognize it, or pass through it in this life.” ~ Nicole Krauss, Forest Dark